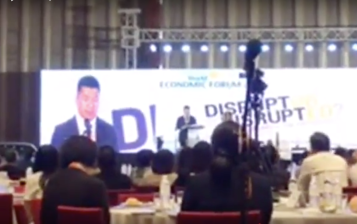 Businessman Dennis Uy delivered the keynote address at the BusinessWorld Economic Forum last May 18, 2018. He spoke about being a disruptor in business, citing how his independent oil business Phoenix Petroleum ate into the market of incumbents and giants. “Disruptor or Disrupted” is the theme of the conference.

The 43-year-old fast-rising tycoon’s aggressive business expansion and acquisition of new businesses were attributed mostly to his close personal friendship with President Rodrigo Duterte and Presidential Assistant Bong Go. All three hail from Davao in the southern region of Mindanao. This is one of the first — or the first — major speaking engagement for Uy who is known to be shy and prefers to be off-camera.

Uy is a third generation member of a family with Chinese roots and who settled in Davao. He often describes himself as probinsyano (from the province) with a different way of doing business compared to those from Imperial Manila. The bookworm also peppered his speech with quotes from his favorite book authors. The even was held at the packed Grand Ballroom of Grand Hyatt Manila in Bonifacio Global City, Taguig City.

If I learned anything in life, it is this: Change. If we will not allow it, we will be left behind. What I am now is a product of several missed opportunities, both personal and external. I was born in Davao City, the eldest child (or grandchild?) in a Chinese-Filipino community. My father did not finish college…naturally, my parents swore that one of their children willahave a college education to secure a better future. And that led to one of the first of the many (opportunities?) in my life.

I went to Manila to get a college degree. I was supposed to go either to UP or Ateneo, but I was very intimated(?) by those who’re based in Katipunan. Ambisyoso kasi and honors program ang in-apply-an ko. So I got a business degree in my favorite school, De La Salle University. Animo La Salle! (Some of those in the audience respond, “Animo!”)

Among my first ventures was a restaurant, not related to Gilmars (or Dencios?) in Iloilo. It was borne out of search for (food place to eat) for basketball buddies who I would hang out (after games). We started out with chicken barbecue restaurant using P500,000 capital….I left the food business for my sister to manage. Other opportunities were knocking on my door.

It was 2002, a year I will never forget, because that is also the year that I had another disruption, and a most pleasant life-changing event. Cherryl Lyn, then my gorgeous girlfriend, agreed to be my wife, and eventually the mother of my wonderful kids.
Having your own family fuels your drive. I simply cannot fail. My wife won’t let me.

Our goal for Phoenix back then was just to survive. But as our network and sales grew, we dared to dream big. We aimed to become the leading independent oil company in Mindanao, and after our listing in 2007, we set our sights higher—to be the top independent (oil company) in the country. And this we achieved last year, after only 12 years as a brand.

Jeremy Gutsche, author of innovation book, “Exploiting Chaos” on how to spark innovation during the times of change, describes 3 phases of disruption. A small competitor emerges but is ignored by the big players. The startup does things well and finds a niche, growing steadily and strongly. And when nobody is looking, the newbie scales up, expanding organically or through acquisitions, and has already taken a significant market share. This could not be truer than in the case of Phoenix.

Nobody cared about Phoenix when we were starting, certainly not the giants. Phoenix owned just a handful of gas stations in Davao, too far afield to even be on their radar. Phoenix’s perceived weaknesses we used to our advantage. We grew our market in Mindanao and then we decided to go national, moving quickly before anybody could notice and put up roadblocks to hinder our progress. What we lacked in size, we made up for in speed and service. What we lacked in capital, our bankers and investors helped fill.

What sets Phoenix apart to this day is access to decision makers. I deal directly with our customers, stakeholders and business partners. Just the other day, one of our dealers texted me about a concern. This direct contact shortens the decision making process and makes us more agile. For us, it is not just business, it is personal business.

Maybe that is an offshoot of my being a ‘probinsyano’ (from the province). In the province, people know each other, making relationships more personal than business-like. But don’t confuse that with being unprofessional. Our executives are among the best in the industry.

As an entrepreneur, it is second nature for me to jump at opportunities, to find a need and serve it. Moreso with my company. I noticed early that chartering an oil tanker is both costly and creates uncertainty for Phoenix’s inventory. So we found a tanker and bought it, and that gave birth to Chelsea Shipping.

Chelsea bought more tankers, and in due course acquired other shipping and logistics companies, including the largest, 2Go, bought in partnership with the SM Group. This boldness paved the way for the listing of Chelsea Logistics Corp. last August.

Chaos theory states that a small change can lead to great consequences. Fortunately for us, our acquisition of 2Go also introduced us to stakeholders who also own a 700-hectare property in Clark. Today, we are developing it as Clark Global City, a central business district similar to Bonifacio Global City. By the way, we are already pre-selling the project, and those who will buy now will be given a BusinessWorld discount.

Our diversification is a strategic move, anticipating disruptions and economic developments that could either help or hurt us. Our purchase of hospitality school Enderun Colleges and Emerald City project in Cebu dovetail with our bullish outlook for the Philippine tourism industry. International tourist arrivals have been increasing at 11% over the past 3 years from 5.36 million in 2016 to 5.97 million in 2016 and 6.9 million in 2017. In terms of growth, the Philippines has outperformed Southeast Asia and even Asia and the Pacific. The number is expected to increase to about 12 million by 2022, according to the government’s National Tourism Development Plan.

While the Philippines has posted record numbers in international tourism arrivals, those pale in comparison to the 35 million arrivals in Thailand, 25 million in Malaysia, 17 million in Singapore, and 14 million in Indonesia. We could definitely do better than our neighbors. We have better islands, wonderful beaches, and very friendly and warm people. Don’t you agree?

The development of e-commerce, particularly online shopping, is both disruptive for business and my personal finances. The logistics network of Chelsea in due course could give rise to new businesses that may become larger than some of the companies we have now. On a personal note, my wife’s favorite is Amazon. Before, if we stay home, walang gastos. Now the convenience of online shopping has taken a toll on my pocket. I love you, wifey!

The biggest disruptor in the past 30 years is the advent of the internet.xxx.

Against the incumbents who do business as usual. Insurgents are certain there are better ways of doing business especially with the aid of technology. Established businesses often refuse to see the changes in the landscape and consumer preference and get left behind. Many of the brands we knew when were kids not so long ago are no longer here, supplanted by startups. But do not rush just yet. Victory is not a certainty. Remember, many upstarts do not get…xxxx…

But we have to acknowledge with urgent concern about the environment and climate change that could hurt our business, especially if electric vehicles become the norm. Although it appears far off, the International Energy Agency noted that in 2016, global electric vehicle stock only accounted for 0.2% for passenger light duty vehicle in circulation. Its time will surely come especially with China and European increasing their usage. You could afford to xxxxxx

Also listen to market sentiment. In politics, that translates to the voice of the voters. Just last week, long time Malaysian leader Mahathir made a comeback at age 92. In 2016, Filipino voters elected Davao City Mayor Rodrigo Duterte as president. His promise that change is coming and his disruptive election tactic of taking his campaign via social media because he did not get enough campaign contribution to run a traditional campaign won for him the highest votes in the land. And who would have thought that North and South Korea would ever agree on anything? Now they might.

Scott Miller, CEO at (Interstate Batteries), wrote a piece the The Velvet Road Revolution(?) that in reality what is going on in most markets is transformation. Insurgent brands rise and rule. The incumbent political establishment acts as if the tenure of US President Donald Trump, there will be a return to normal. Maybe that is also how the political opponents of President Duterte are hoping for after leaving his office.

And that uprising, particularly in Philippine business, will likely result in a groundswell in the coming years, that would reshape our economy and the Filipinos’ way of life, surely for the better.

Change is coming and we have no choice but to embrace it. If we don’t evolve, we will become extinct. We will be the products of yesterday instead of being the brands of the future. Until then, we set realistic goals, maintain good relationships with our stakeholders and customers, and ensure we have as much control of the value chain as possible.

But we are not afraid to explore, learn new things, spread our wings. After all, that attitude is what got me here in front of all of you. Udenna is now a group of 70 companies in 6 different industries, and still growing. Surely there will be headwinds. But as long as we can turn our sails, we could make it as a tailwind.

I have always embraced change, and there’s more to come from Udenna to serve the stakeholders better, and to work for the Philippine economy. (Speaks in Visayan language.) I don’t have anything that you do not have. I think you are even more capable and talented than I am. If I can be a disruptor, more so can you.

Thank you and Mabuhay.

Here is a video of Dennis Uy delivering his speech.