What I learned from “BBC Dad” about the two Koreas 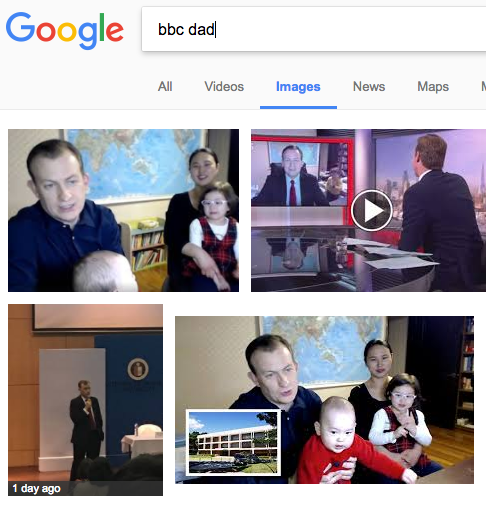 When Facebook popped notifications that Dr. Robert Kelly, the infamous “BBC Dad,” is speaking at the Ateneo de Manila to talk about goings on in North and South Korea, I bookmarked a streaming post and went back to it later.

I normally wouldn’t be interested in this geopolitics involving a neighbor, but since it was Dr. Kelly himself, I might as well. The infamous South Korea-based American academic has charmed the world — I included — when his kids and wife video bombed a live interview he was having last April 2017 over BBC. He was talking about North Korea then.

I took notes while he gave a lecture at Ateneo that was streamed live yesterday. Here are some of them:

North Korea has been tunneling for decades in preparation for an American air strike.

(This means that) if US will attack North Korea like how it did recently in Syria — a surgical two-hour long strike — it will require days, weeks, months (to have an impact). As soon as North Korea is bombed, they will put all their stuff underground — which means the US will need to pummel them again, and again and again.

Once you start bombing North Korea, you’re bombing the most dangerous country in the world. It has 1.5 million people that has been in military training for this for decades.

Bombing North Korea will be a bad choice. They’ll get human shields around the targets. After 6-8 hours of the first drop of bombs, they’ll put regular civilians, babies, mothers, grandmothers, and put them around targets, and will make sure cameras are there to show graphic footages. Like US in Vietnam (where there were) pictures of dead kids. Then everyone will say the Americans are imperialists.

The North Koreans may respond by bombing Seoul.

South Korea is very poorly configured for a simultaneous tit-for-tat with the North. Seoul and its surrounding areas contain 50% of its entire national population. That’s 25 million people in a state the size of Connecticut. It is extremely dense, worse, it adjoins the demilitarized zone.

That’s a massive amount of people next to a highly centralized country.

In other words, the heart of Korea is just a few miles away from one of the world’s most fearsome military equipped with nuclear weapons. Worse, Seoul is getting larger, not smaller.

North Korea has an alliance with China, and may call on China for help (if US attacks N. Korea). We don’t know what the North Korean threshold are with the Chinese, what levels of strikes vs North Korea will activate that alliance. If US will keep on bombing North Korea for 2-3 days, the Chinese will feel more pressure to get involved.

NOTE: North Korea has had trouble standing on its own. For most of its history, it has a patron. That was the USSR, which collapsed. China did not really start supporting North Korea until the 2000’s. So for a brief period, between USSR and China support, North Korea was on its own. That’s when it experienced a major regime crisis: the famine.

It’s because of that man-made famine that North Korea is now more open globally. The Kim family allowed North Koreans to cross the borders with China borders (to have access to food, and more). In turn, North Koreans have picked up info, i.e. how South Koreans lived, have nice cars, DVD player, flat screen TVs, modernity.

The North Korean elites also enjoy these Chinese resources flowing into North Korea. They get access to flat screen TVs, liquor, sports cars, jet skis. The elite really have the lifestyle, and the pipeline for that is China. (If this pipeline is closed), North Korean elites will start to fight over what’s left.

4. CUT OFF THIS CHINA PIPELINE

This is the most promising for the Trump administration: You have to cut off the flow of resources into North Korea. North Korea has never been able to stand on its own.

China can say they have no political leverage with the Kim family, but they have a lot of economic leverage. China doesn’t enforce (a UN-related deal the Chinese agreed to). They do a little bit, then backslide, then return after a few months.

5. EXPOSURE OUTSIDE NOT ENOUGH

Why not flood information to North Koreans so they know that the world is out there, know that North Korean government is corrupt?

The Kim monarchy is now on its 3rd generation. They have a semi-divine personality. Wait for the younger, better informed set of leaders to take over these institutions and hopefully will see outside world has change, and they’ll bring in new preferences.

But this generational strategy will take about 30 years.

6. NOT WORTHY NEGOTIATING WITH THE NORTH KOREANS

Direct diplomatic relations with North Korea is an error. They are unreliable negotiating partners who exploit. They are talking to us, but in the background they are building nuclear weapons. The talks are meant to bluff us while they build an intercontinental ballistics missiles weapons.

7. NUCLEAR CAPABILITY IS FOR REGIME STABILITY

If the North Koreans prove they can do that — that they have proven, functional, nuclear weapon — in my opinion, the US will strike. This will be disastrous.

In the minds of many Americans, North Koreans are a psychotic, gangster tyrant that cannot be trusted. But that’s up for debate.

I don’t believe North Koreans are irrational, or have offensive intentions. I believe the nuclear capability is for regime stability, not for offense.

Or maybe not. Perhaps Americans will learn to leave with the North Koreans, as they have learned to live with Soviet, Chinese, who also have nuclear power.

South Koreans removed its president (Park) from power after she was implicated in power influence scandal. Park may end up in jail this year. Her impeachment trial was long the OJ Simpson scandal. It became surreal after a while.

Background: The high court agreed that President Park has known about friend/s extracting bribes from corporations. This led to a full impeachment — extremely rare in democracies. Nixon resigned before he was impeached.

Democracies never go thru the whole impeachment. And in South Korea it did. The South Koreans just showed us how to remove a president without violence, terrorism, coup de tat, military actions.
About 4% of the entire country’s population were marching on the streets – they even picked up their trash. No one got hurt. The police showed up and in some instances, not even armed.

This was Korea’s finest hour.

They removed an obviously very corrupted president – and thats how democracy is supposed to function. Every democracy face corruption issues. But after President Park was impeached, South Koreans accepted the results. I was floored when I heard that.

This showed South Korea is not North Korea.

9. THE NEW SOUTH KOREAN LEADER WILL NOT BE POPULAR

The South Korean presidential election is on May 9, Tuesday.

Party badly scarred from Park scandal renamed itself, and had a factional split. They are running their own presidential candidate.

The candidates – will probably just get 25% votes. That will be a catastrophic decline. Park got 53% of the votes.

This is the biggest story of the South Koran election – the implosion of the right .

The South Korean right is so desperate for Hong to leave Park shadow that candidate is calling himself Trump of Korean. We laugh about this. I don’t know what Trumpism is to Koreans.

In the center is a tech entrepreneur who marketed himself as a liberal. Actor, with a celebrity status and influential now. He’s like Arnold Schwarzenegger: If you’re famous, can run for president. You can run as a media celebrity in a democracy. But he has not managed to nail down the lose conservative votes.

What it means is that the liberal may actually win – with just 40%. Bad for a democracy. He ran for presidnet in 2012 and got 48%. Has not expanded his coalition. He will be a minoritarian president. Democracies work better if get majorities.

Here’s the rest of his lecture:

And here is Rappler’s report on how the Philippines figure in North Korea’s move to beef up its nuclear capacity.