Depending on whose online pages you are reading, or what your emotional response or professional background is as updates trickle in on the missing Malaysia Airlines flight MH370, you either love or loathe the handling of this crisis.

I’ve been monitoring how those from different camps perceive the puzzle of #MH370. Having reported and managed newsroom teams handling a corporate crisis events in the past — from sinking ships to airline woes to high end condominium blow ups to massive floods, brownouts and more — I was keen to compare and learn. After all, it is not often that a massive Boeing aircraft with a good safety record, carrying 239 people on a long range Kuala Lumpur-Beijing flight disappears to we-don’t-know-where. Malaysia Airlines is facing a “black swan” event – an unprecedented and unexpected situation.

Thirteen days since Day Zero, the jury is still out. What is clear at this point is something typical of any crisis. Those who know how it is like to be on two sides of the crisis — the company involved and the media covering the global event — are doing what they do best: being themselves.

Public relations industry members and crisis managers are one in lauding the legacy carrier for its by-the-book moves, opting to tune out the criticisms, which are chanted in mainstream and new media day in and day out. (Read: Malaysia Airlines’ brand undamaged…for now)

The crisis management guys, schooled in theory or actual experiences, are concerned with managing the now to minimise the impact on the corporate brand long after the crisis is over. In several blog posts or quotes in news reports, there is consistent praising of how the airline employed the “Triple R” of crisis communications: Regret, Reason and Remedy.

A blogger explained this industry strategy: “When under fire during a crisis situation, executives should always remember the three R’s. They must first show empathy for those affected (regret); second, explain what happened (reason) ; and finally, state what measure will be taken to fix the problem (remedy).”

BP has employed this in the oil spill in the Gulf of Mexico during 2010, and US President Barack Obama followed this style when he gave a public address right after the Boston Marathon Bombing in 2012. Budget airline Cebu Pacific team partially did this when their aircraft skidded off the Davao runway in 2013, closing the crucial Mindanao gateway for days. Ayala Land tried the same style when a unit at its upscale Two Serendra condominium project blew off, killing 4.

What makes the #MH370 incident interesting to me is how they handled their social media properties — their official Twitter and Facebook accounts — as well as the airline’s website to do the 3 Rs. Probably because the company involved is too close to home; or because I am really keen on aviation goings on as the industry in Asia has been growing by leaps and bounds; or because digital communication strategies of companies are on the spotlight in this social media-crazed day and age, Malaysia Airlines’ presence online for me is a classic case study in the making.

“Dark site,” an industry jargon for activating a homepage stripped of any promotional materials and designed to provide information and updates about the incident, was live on http://www.malaysiaairlines.com a few hours after news broke that #MH370 went missing on March 8, 2014. 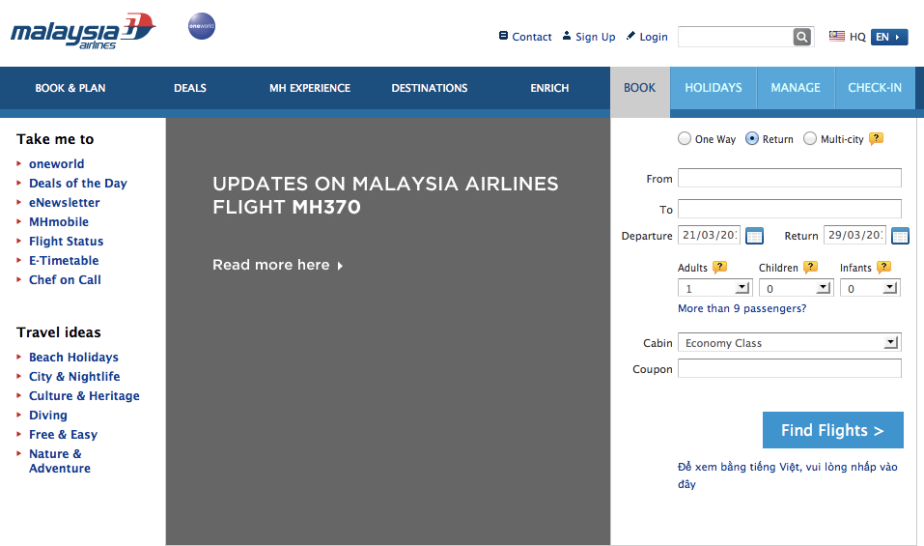 If you click on the “Read More,” it goes to the page with the latest update:

A pre-approved “dark site” design, its contents and succeeding updates are meant to ensure that the company in crisis is in control of the communication flow and messaging during the crucial hours or days. They know that if they allow gaps, others who may have speculative info, their rivals, or whoever with derogatory message may swing public opinion against the company, harming its long term prospects.

I learned that a dark site, which usually has elements at their barest minimum, is also able to handle the deluge of online visitors. A sudden surge in the number of visitors to an existing website could crash the site if it is not prepared for the increase in traffic that comes with a crisis situation. With a higher traffic, a dark site can rank higher in search engines, allowing the company to gain the upper hand and manage their messaging better.

Since Day Zero, Malaysia Airlines’ homepage has always turned out on Page One of Google Search. Great. BP did the same in 2010 when it was handling the 2010 oil spill crisis. It helped that the oil giant’s dark site was SEO-friendly, too.

Airlines, companies in extractive industries, food companies, as well as those in finance where a crisis can mean losses worth millions or billions are among those that must have a crisis plan in place. They are prepared for the unexpected. It may be an unpleasant thought, but the chance of dealing with a crash someday is ever present in an airline business. The fact that Malaysia Airlines was able to execute the dark site almost immediately indicates that a crisis plan and team are in place. It is clearly not on an ad hoc mode as it faces a super connected public.

The airline’s social media channels mirrored this, complementing and amplifying the messages and regular updates on the dark site.

Offline, the airline provided grieving and distressed family and friends of the passengers and crew free hotel accommodation, financial assistance, counselling and more. PR practitioners harped on how these efforts — online and off — followed the industry guidebook’s 3 R’s to a tee.

Global and local media behind the daily news updates are not always buying into the “corporate responsibility” line. The personal drama of the friends and loved ones, the distraught relatives calling out the names of the passengers, the personal tales of the handful who missed the flight — all make good TV and YouTube screens materials.

The journalists are following their guidebook, too.

Crisis coverage calls for scenes and sentiments that highlight the mood of those involved. A wailing relative makes a powerful visual, more than a video clip of someone who is suffering in silence. Such display of pain resonates to a viewer or reader who has gone through an equivalent experience, or moves one who has vague understanding of the emotional turmoil involved in such real-life events. It is human drama at its best.

High emotion scenes remind people of their own mortality, of the loved ones they are blessed to still be with. These trigger them to confront their own life meaning and purpose. Journalists think it is their duty to humanize the story, warts and all.

The need for context also calls for sound bytes from the authorities. Presscons provide journalists materials they need to complete their stories, or to update their social media audience. The CEO of Malaysia Airlines announcing the unknown fate of #MH370 make good copy. The search for truth calls for the face and words from proper authorities and unbiased experts.

The daily and regular press conferences in Malaysia provide materials for reporters and their local or global newsrooms. Media outlets have to feed their beast — their newspaper, online sites, social media platforms, etc — hungry for 24/7 updates.

Scoops and exclusives are par for the course. Enterprising journalists who make an effort to dig some more, or get lucky with “facepalm” stories. Example: the airline fetched passenger relatives from Beijing and was supposed to bring them to Kuala Lumpur where the centre of communication and search missions are. The flight brought them to India!

We saw this coming: Reporters digging into Malaysia Airlines’ financial troubles and using that as a context to explain why it did not subscribe to a global service that could have helped locate the missing plane. It has the ingridients for a blame game. The airline was silent about that.

The theories to explain why #MH370 vanished have come and gone — smoke in the cockpit, pilot suicide, terrorism, mechanical failure, and many more. The relatives remain holed up in their hotel, waiting, waiting and waiting.

As of writing, two leaders of the 26 countries involved in the search efforts have gone public: Malaysian Prime Minister Prime Minister Najib Razak has declared that “deliberate” actions were likely taken by someone on the missing plane to turn off communication means and divert it from its flight path. He also announced that instead of focusing search efforts off the Vietnamese coast, or where the plane made its last contact, areas to be covered has shifted to the Indian Ocean and the vast land areas next to it.

Australian Prime Minister Tony Abbott announced to the parliament that two objects were spotted by satellite that may have come from the missing Malaysian airliner. Abbott described it as a “credible lead.”

Journalists and PR guys will continue to be in a tug-o-war as more days go by without a definitive end to the #MH370 saga. Whatever the outcome, tears will continue to flow in the years ahead, social media will stay on fire as search and efforts follow each lead, and PRs and newsrooms will keep on fine-tuning their strategy to get the most of the lessons from this single, bizarre event.