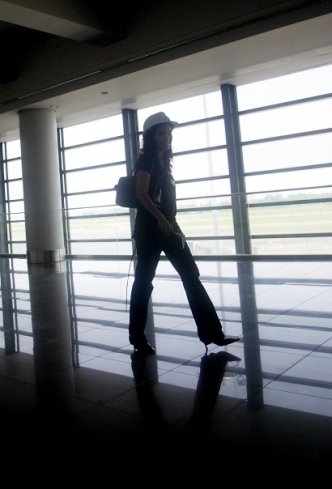 It was an interview that lasted for more than four hours—10am to 2:15pm, to be exact. Not that my colleague and I was so fascinated with the controversial businessman we were interviewing that we didn’t notice the time. It’s just that he’s been slippery in the past and generally avoided the media so it was a chance to ask a long list of questions.

I am writing about the experience not to play the guessing game on who he is, but more to share (and document) one of my journalism career’s bizarre moments.

We met in a posh hotel business room, obviously a neutral ground. On one side are my colleague and I, both of us working on a special tell-all project. On the other is the controversial businessman with three companions: a tall been-there-done-that former military general with a big voice that must have been honed from screaming orders in his past career; a talkative lawyer with previous experience of dealing with veteran press people with their ethically questionable practices; and a timid but firm lady lawyer who would speak only when asked.

The first hour was spent with the former general and the talkative lawyer basically taking over. The reason for their presence was obvious: to intimidate us. They questioned our objectivity on our previous articles on the issue that concerned them. They (implicitly) bullied us for siding with the parties hostile to them. They took turns pointing out the damage our previous articles have caused their company and the businessman’s family. It was even mentioned that they have a copy of my resume so they knew I understand numbers. Should I be impressed that they took time to research about me? Or should I be scared that they actually checked my background?

The initial shock and awe approach had an effect. It felt like I had on an orange overall with a prison number on it, being grilled by police and intelligence inspectors who wanted to break my will so I would confess, “Yes, I’m guilty!” And their decibels were getting louder as my colleague and I kept our silence. Actually, we were just letting them vent.

Until perhaps my colleague couldn’t take it anymore, and decided to address the businessman himself, pointing out that we did try to get an appointment with him months ago, through a go-between, even before our first batch of stories came out. But the message we got was he’s shying away from the media. The point was, we did try to reach out to him. We gave him a chance to comment and refute allegations against him and his company. Plus we knew of their court filings against the other parties, so even when we were brushed away, we were going extra miles to get the big picture.

But with his two companions not yet ready to let go, we went around in circles for a few more minutes, before finally resolving to get down to the issues. Whew.

It’s not my first time to face parties who have been scorned by stories I have written in the past. In my six years of writing for a publication deemed to be independent and a truth-seeker, I have learned the wisdom of talking to all stakeholders in an issue, no matter how ghastly the other parties are. They should never be able to claim that I did not try my darnest best to get their side before my story was published.

This was particularly etched in my mind about three or four years ago. I met up with a politically well-connected businesswoman and her husband with an i-am-so-ready-to-beat-you stance, in a coffee shop to discuss a story where I mentioned them. They were pissed. As far as they are concerned, they did nothing wrong. They were just latching on a business opportunity which they did not think violate any law. While the deals were not unlawful—with a hint of everyone-is-doing-it explanation—it was unethical, which was the point of the story. So I just sat there and listened to them rant. I noted their sentiments, then I also shared how journalists like me do our job (we research, we get documents, we interview, the works; the underlying message of course is we don’t accept any form of bribe).

I guess these experiences come with the job. A friend said I should look at it from a power-play perspective. Meaning, here I am, a penniless journalist, with the power to give headaches to the rich and the powerful. But I’d rather not subscribe to that. I’d leave that to the politicians and the people that kiss ass. It’s not my aspiration to seek dominance. That’s tiring, not to mention, lonely.

I’d rather look at these as spices of life in general. It’s partly frightening, partly exciting. The kind that differentiates what I do now with what I used to do. The kind that I could look back to and still be thrilled, even when I’m not writing stories anymore.