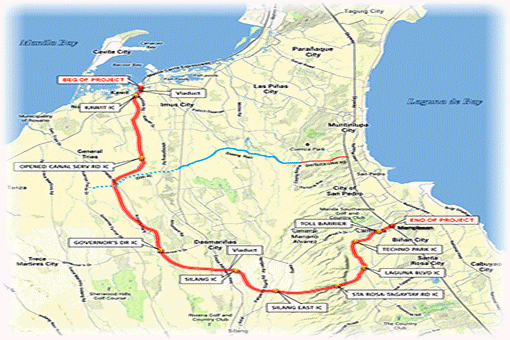 There are winners, and there are, um, snubbers.

And, as history will probably judge the recently concluded bid for the right to build and operate the Cavity-Laguna Expressway project, the Filipinos win. Whatever were the dramas and twists-turns that transpired in the corporate and the government bureaucracy, today, May 26, is a good day for the stakeholder that trumps all interests: ours.

Just a little past 2pm today, the project proponent, the Department of Public Works and Highways (DPWH), made the announcement after opening the bids of the last two standing parties — San Miguel Corporation and Metro Pacific Investment, two of the country’s biggest and most aggressive groups.

To the uninitiated, the amounts may be overwhelming and highlight how competition is ideal for getting the best deal “for the people,” but don’t miss the high drama. The unfolding of this project has the making of a soap opera, the primetime, box-office kind.

Here are where and how the fun and drama happened.

One.  This is the second time the CALAx project, once touted as one of the biggest projects under the banner public-private partnership infrastructure scheme of the Aquino administration. The first round was conducted in June 13, 2014, with the team-up of Ayala and Aboitiz groups (via an entity called Team Orion) winning it with an P11.66 billion bid.

Notice the difference? Round One’s winning bid was P11.66 billion. Round Two’s is P27.3 billion. The difference is stark: P15.6 billion.

That amount is the gap between how much the winning proponent will be paying the government for the 35-year right or monopoly over the 44.6-kilometer tolled road project. This amount is to be paid to the government in addition to the P35.42-billion project cost. (The higher the bid, the more the government can use to spend for other social services, i.e. education, security, infrastructure, the works.)

There were many protests and eyebrows raised, including mine , when the Aquino administration ordered a rebid. Now, I nod in agreement. The P15.6 billion difference seem to legitimise that decision to step back to “maximize the economic benefits” of this PPP project. Hindsight is, indeed, 20-20.

Two. San Miguel did this. Yeah, it was the entity that led us to this P15.6-billion jump. Had it not protested all the way to Malacanang, MPIC would not have made the P27.3 billion bid today.

To recall, San Miguel was disqualified over what the DPWH called a legitimate reason: a typo on its bank guarantee. Its financial bid last June 2014 was not included in the roster of those whose bids were eventually opened, but San Miguel’s representative showed off how much it betted on the project: P20.1 billion, which at the time was over P8 billion MORE than Team Orion’s. DPWH stood by its decision, citing a fair and square bidding process. Malacanang, well, President Aquino to be exact, was eventually swayed. (That prompted me to write this: Money or integrity? The CALAx case study).

That political decision, fuelled by economic and legal and many other interests, brought us to today, the announcement of the second, and hopefully final, winner.

MPIC then defied popular sentiments, including that of the Ayala group, which seemed to have felt so wronged that it decided to snub the 2015-era bid. Ayala reps have said that with San Miguel’s P20 billion bid in 2014, that amount obviously would be the floor bid for Round Two. Just did not make sense for the oldest Philippine business group‘s P11.33, which had been pronounced the winner before the rug under them was pulled.

As the Ayala group licked their wounds, MPIC’s Pangilinan even said they will “slow down” in vying for government projects since they need to “pause and digest” they PPP projects that they have won or in the process of rolling out, including the P65-billion ($1.5 billion) Light Rail Transit Line 1 (LRT-1) Cavite extension project, as well as the NLEx-SLEx connector road.

While the 2nd bidding process was underway, MPIC lined up again, and faced off with San Miguel, an almost consistent rival. Both have been on opposite ends in so many other industries: telecommunications, infrastructure, media, power, utilities, food, aviation, the works. The two’s rivalry, which some say has cascaded down to the personal level between Ang and Pangilinan, has been a study in contrast, too. But that’s another blog entry.

Now here’s the kicker: MPIC’s bid this time is a P27.3 billion, a whopping almost P16 billion jump. WHY? Did they the Pangilinan group see something that they didn’t before? Were they that desperate to win this time?

San Miguel’s bid was increased, too, from P20 billion to P22 billion, but MPIC did their numbers so differently this time that its bid was so far from San Miguel’s. Again, why?

Four. The two rivals are actually the most ideal to bid for the project, a 4–lane, 45-kilometer closed–system tolled expressway that will join two existing toll road projects: CAVITEx in Cavite and SLEx in Laguna. Both provinces are among the biggest economies in the country outside of imperial Manila.

(CALAx project will start from the CAVITEx in Kawit, Cavite and end at the SLEx–Mamplasan Interchange in Biñan, Laguna. The project will have interchanges in 9 locations namely; Kawit, Open Canal, Governor’s Drive, Aguinaldo Highway, Silang East, Sta.Rosa–Tagaytay Rd., Laguna Blvd., Technopark, and a toll barrier before SLEx.)

A tollroad company vying for another tollroad project makes sense in terms of knowing what numbers to plug in while making the bid for the financing, design and construction costs of the Calax project. There’s at least less guessing game.

MPIC and San Miguel, by virtue of having the most and longest aggregate length of the tollroads in their infrastructure portfolio, are the biggest players in this game.

On the other hand, Ayala’s Team Orion’s participation the last time was banking mostly on how the road integrates with a core business: its real estate developments. Its properties stand to benefit from preferential access points to/from CALAx.

Tollroad is a non-core business for the Ayalas, but simply a way to defend their core ones. We’ve seen this in their strategy for their winning bid in the Daang-Hari-SLEx road project. That road bid was meant to benefit their projects in the area, that include a residential enclave and a retail/mall project.

But back to CALAx…

Obviously, the delay in the (final) award of the project is already a pain. But at least now we have dates. (Hang in there!) According to the DPWH:

July 7 – schedule to award the project

And according to PPP Center’s Cosette Canilao: CALAx will be “fully opened by 2020.”

And yes, I haven’t forgotten one of the hanging questions: The why of MPIC’s aggressive bid. The answer/s will trickle in as the news reports and interviews with the company officials start pouring in. But for now, we just enjoy how the drama is unfolding.